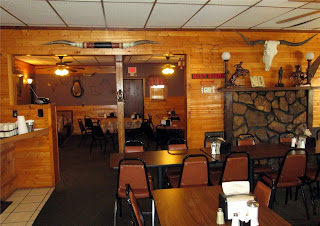 Forsyth MO – Eating at the Longhorn Restaurant is normally a rather pleasant affair. This burger joint, located in Forsyth Missouri on the main drag, is always clean with great tasting food offered from a surprisingly varied menu. And, I would have enjoyed myself, on this particular visit, were it not for my obnoxious friend in the persona of Daniel 'da gut' D. 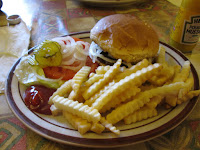 Old Daniel was definitely someone that wasn't cut from the common mold of mankind. No, if you could imagine a bell curve of humanity, with dull normal being some where's in the middle, old Daniel was off to one edge or the other. And, while this meant that he was a bit strange, he could also eat like the dickens!

On the occasion of this luncheon, I ordered the Country Burger Deluxe (only it was spelled with a K), a combo including a hamburger, French fries and all the fixings. Daniel, being of slow wit, also ordered the exact same thing. I was actually thankful that he did order a hamburger as opposed to a large plate of spaghetti! Watching that human garbage disposal fling noodles and sauce around would have been too much for me to bear.

After a short time, our server, a man by the name of Rex brought out our meals. (Rex is on the tall side and I therefore remembered his name as T-Rex). As I daintily assembled my hamburger with the finesse of an educated man, my 'Neanderthal friend' across the table, quickly demolished his food to the point that it resembled the scene of some horrific accident. Bits of food were hurled out in a circle all across the table as he devoured everything in much the way a hungry dog might eat. As I carefully nibbled at my burger, I forced myself to remember that he was buying.

Yet all, in all, this Longhorn was an enjoyable eating experience!
Posted by Dan Owen at 2:35 PM