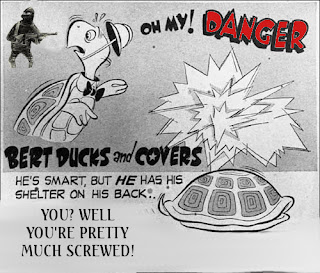 In response to the carnage witnessed over in Paris, the President has placed all America on a HEIGHTENED ALERT STATUS! Obama has also issued the following directives and advice to take effect immediately:
Remember citizens, if you see a terrorist charging at you...DUCK AND COVER, DUCK AND COVER! Uh wait, wasn't that for something else??

Editors note: I fully understand the gravity of events unfolding all around the globe. But, if lose our sense of humor, then we can only become grim and of sour disposition.
Posted by Dan Owen at 11:44 AM