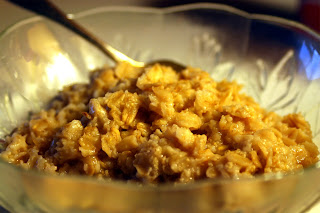 I like to make oats for breakfast in cold weather for numerous reasons, not the least of which is the taste! But, I found that getting the mix of water to oats a bit of a challenge. Some days I'd do pretty well, while on other days, the oats were either too dry or too watery.

Rising to the challenge, I decided to try and discover just the right proportions for making a single serving of oats. I knew it might be a hit or miss deal, for a while, and so I kept a log.

First off, I started with the package directions which instruct you to bring a cup of water to a boil. Next, you add in a half cup measure of oats. Stir the oats and simmer them for five minutes, rest the oats for a couple of minutes and then enjoy. A cup of water? At least I had a starting point.

I wanted to get this deal as precisely right as possible and so I brought into play an Escali food scale set to record in gram weights. First, I placed an empty measuring cup on the scale and then hit the tare button to zero it out. Next, I filled the measuring cup to exactly the one cup mark and recorded that weight as 230 grams. That gave me a good starting point for half the ingredients. Now, all I had to do was to find just the right 'half a cup' amount of oats to suit my particular taste.

As you can see, I quickly zeroed in on what I felt to be a winner on the first try! I then took a piece of paper, wrote down the amounts, and stuck that to the side of the oats carton. Note that should you desire, say two servings, you merely have to double the gram weights of each ingredient! Bon appétit!

Items used for this meal: