December marks the start of the cold season! 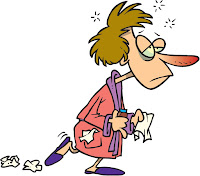 While the title was meant as a double entrendre, December is a time of year when colds and the flu often make a big jump in the number of individuals affected! The reasons for this are numerous, but most hinge on the fact that the Holidays bring a lot more people together into closer proximity than at any other times of the year!

As the fever of the season sets upon us all, there is a felt and urgent need to get out and shop for Christmas gifts, to hit those office parties and to get together with loved ones. With more people moving about and bumping into each other, there are many more chances for those bad germs to spread! Add in the stress that the Holidays naturally bring, add in a touch of really cold weather and voila! You have the perfect recipe for getting those sniffles, aches and red noses that only colds can bring!

How can you avoid it all? Well, I suppose you could lock yourself away until March, but in general that's not a viable option. For most of us, we'll have to just shoulder through the gauntlet with a hope, aspirin and a prayer! But wait! There are some common sense things you can do to lessen your chances of falling ill, and here they are;