Cameras in the wilderness! A good thing? 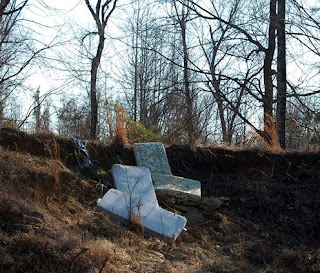 In general, I am not a big fan of the Federal government. I consider it a bloated and ill beast that often causes more loss than gain. However, on rare occasions, there is something to be said for a few of its departments and one of them is the Corps of Engineers.

The CoE is a U.S. federal agency under the Department of Defense and a major Army command made up of some 37,000 civilian and military personnel, making it one of the world's largest public engineering, design, and construction management agencies. That government to civilian connect makes it rather unique, in my view. Unlike the Bureau of Land Management which is a complete cluster fuck, the CoE actually can get some good things done and one of them would be to help us all keep an eye on our public forests, parks and wilderness areas.

The problem that needs addressing are the small yet growing number of miscreants that like to use our public lands as their personal dump sites. These are often the same group of individuals who often pooch game illegally, cook drugs in secluded spots and generally leave a trail of trash where ever they happen to wander. In their small minds, they get away with this form of misconduct because there's nobody around to watch them. I'd like to propose we change that!

My plan is really quite simple and would be a great benefit to many groups. What I would propose is that the CoE embark on a project like 'Operation Lookout' that would allow them to place surveillance cameras in random areas in select locations that could be changed from time to time. These cameras would be linked to the Internet and would be available 24/7 for public view. This kind of arrangement could benefit all sorts of groups including land owners, parks, animal lovers, etc. More importantly, such an arrangement would pose a great deterrent to people who make trashing our landscape a lifestyle.

Such an operation could be funded from numerous sources form Federal, State and local resources. The cameras could be placed high enough to cover large swaths of ground and, (just like in a grocery store), would act as a potential deterrent to evil doers everywhere. The only downside I see in such an endeavor would be objections by people who might accuse the agencies involved in spying on them. To that I have no answer other than to say we live in a far different world than that of our grandparents and must weigh our privacy issues carefully before we implement any potential solution.
Posted by Dan Owen at 7:54 AM