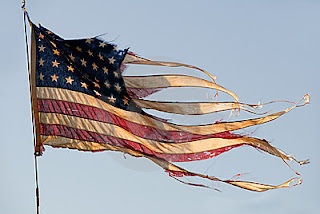 Perhaps it's just me, but over the past few year's, under the Big Mac Daddy's lordship things seem somehow no right. Now don't get me wrong, I actually like that big old queer-ball aka Barrack Obama. He makes for a great comedian and can get me to laughing right along with him, as he muddles his way toward the end of a long and lackluster pair of terms in office. As a matter of fact, the biggest joke of all was that we elected this nut-job twice! (It's like we just couldn't get enough of a dose of abject failure and had to have just a little bit more). Well, now we're all positively gagging!

So, here we are, circa 2015 with just a couple more months to go. And, as I look around myself I've taken note of a few of the more obvious cracks in the Republic's foundation:
I could have gone like that on for some time, but I'm sure my dear reader (I have only one), can come up with a few cracks and potholes of their own.
Posted by Dan Owen at 8:29 AM

Email ThisBlogThis!Share to TwitterShare to FacebookShare to Pinterest
Labels: Forsythkid, Obama, State of the Union, tens reasons why