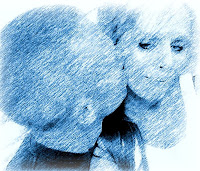 Banquet occasionally puts together a decent frozen meal. The key word here is occasionally. Other offerings are a culinary kiss of death, if you are older and are watching your salt intake! That said, let us venture forward!

Banquet's Salisbury Steak Meal, Now with Mac & Cheese caught my eye while perusing the offering in the frozen food isle at a local grocery. Gosh, it was only a buck and nine cents, a gold mine these days!Quickly, I grabbed one and went bravely onto the next isle..

Once I got home, the smallish meal went into the freezer. There it sat in lonely solitary as I ate up much more healthy choices. Then, one evening, I came up short. There wasn't much in the fridge and so I investigated the freezer compartment. Ah! There in a corner was my little Banquet meal a deal. Out it came and squinting at the small print I readied it for the microwave...

Preparing most Banquet offering are pretty simple; slit the film, nuke for 2 minutes, reseal and nuke for 2 more minutes. Here is what it saw after placing the plastic tray on my plate;

Welcome to the 21st Century, brave souls! Way back in the 70's, I think I saw this very same image on a NASA Apollo mission. Now, here in 2015, I was faced with the same sort of crap!

OK, at only 300 calories, this did fit into my diet plan. But, then I noticed that the sodium level was an astounding 1,110 mg! Ah, no wonder it tasted pretty good! It was the salt!

Well, lesson learned! Some of Banquets meal are not bad - others are best consumed by twenty somethings. I scored this one at an 8 for taste, but don't plan on buying it ever again!