I like to make a stir fry combo fairly often for a hearty breakfast. Generally, my ingredients include a little oil, cubed stew beef, bell pepper, onion and oregano along with a splash of Worcestershire sauce. This combo generally takes only a few minutes in a skillet over medium high heat to prepare. My problem was that the cheap cuts of meat were generally still tough to chew after so short a cooking time and I wondered if the might be some sort of work around.... 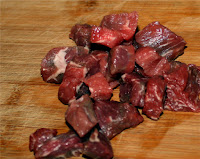 The answer, I thought might be to precook the meat and then store it in the fridge until it was ready to use. To that end, I took about 70 to 80 grams of cubed stew meat and placed it into a small ceramic pot over which I covered everything with water. This was brought a brief boil and then simmered for about thirty minutes. Once I thought the meat was tender, I drained off the water and placed the cooked meat in a small baggie in the fridge. 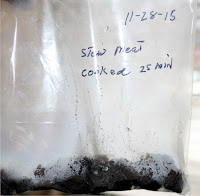 [Normally, the power used to accomplish this would add up over time, but since I made it using a Duxtop induction counter top, my cost was only a couple of cents]!

The next morning, I assembled my ingredients, prepared the stir fry as normal and thoroughly enjoyed the very fork tender meat!
Posted by Dan Owen at 1:25 PM