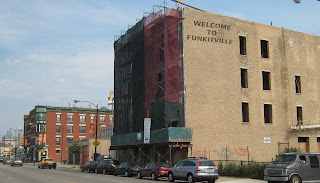 Not far from the town of Forsyth Missouri is a twin city known by the name of Funkitville. And while Forsyth sports some great eateries, her twin... well not so much! But being the adventurous sort, I decided to drive over there to see what they were offering for a Thanksgiving repast!

My first stop brought me to the venerable (or possibly venereal, as in the disease) Frote Mugster, a long running and maybe now a bit run down bar and restaurant where only those with excellent immune systems even dare to venture. I sat myself down at the bar and ordered up their 'Birdy Special', as the locals called it. The menu had informed me that I would be getting some meat and a baked potato all swimming in a nice pesto sauce. How International! I snapped a picture, observed something moving in the sauce and promptly left, still hungry.

Charles Steak It to Ya 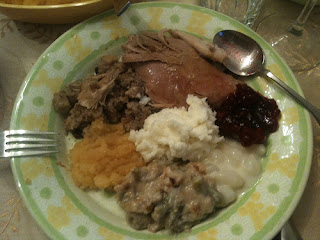 Thinking I might have better luck elsewhere, I walked down the road to what I been told would be a more upscale restaurant called Charles Steak It to Ya. Upon entering, I noticed right off that most of the tables appeared to be non-grimy – a big plus. I got myself a booth in the back and ordered the 'Meaty Thanksgiving Special'. The menu promised I would get turkey, mashed potatoes, sweet potatoes, stuffing, French green beans and pearl onions in a white sauce. I want to tell you, just the thought got my gastric juices a running strong!

The reality, however, was something of a visual jolt! For one thing the turkey meat felt a bit hard to my fork. (I think 'rigor mortise' had set in before it was cooked). The potatoes were also very stiff and those green beans emitted a rather unpleasant odor. I nibbled at my plate for just a second before feigning intense stomach cramps. Then, I was off to the next venue with my stomach now positively growling. 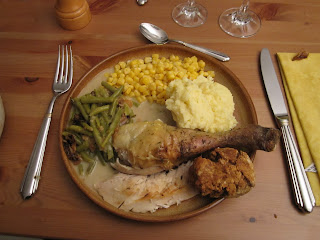 Of the three eateries, the Long'n'hornie proved to be the real pick of the litter. Inside the restaurant, there were actual people sitting down and eating with no one running for the bathroom. Wow, I thought. I'd found a small piece of culinary heaven right there in Funkitville Missouri!

The menu description for the Thanksgiving meal informed me that I'd be getting a real 'leg up' food wise. I also noticed that all the 'normal' ingredients appeared to be in place; there was meat, corn, mashed regular and sweet potatoes, and even green beans that looked like green beans! I ordered this and stuffed my napkin up under my chin in drooling anticipation...

A few minutes later I was served and then ate heartily. (I swear, the sight of me gnawing on that big old turkey leg must have garnered a few stares, but I figured what the hell). After all, it was Thanksgiving! Well, I finished up with a clean plate and then wandered over to the checkout counter.

While I was waiting to pay, I asked one of the servers as to what exactly that brown lump on my plate was. It had a very nutty flavor that I hadn't experienced before. The server called over to the kitchen,' Hey George! Your dog is crapping in the food again!' I shrugged, paid my bill and left.
Posted by Dan Owen at 8:27 AM