Could Global Warming have hidden benefits for northern states? 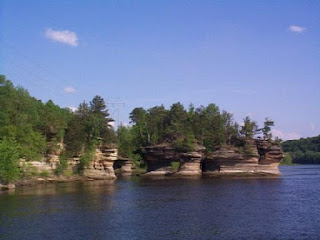 This morning while enjoying a nice hot cup of soup with the mercury outside reading in the eighties, I had a bout of epiphany. At first I wondered if I was suffering form some sort of mental seizure, but no it was one of those moments when my mind took a leap and then a jump to a new and interesting thought. It went something like this:

“Man that soup sure tastes good. It’s a little cool this morning and finally were seeing some seasonable readings. This winter has sure been warm and February was riding in on a 13 degree above average start. Hmm. I’ll bet that means we’re going to have a hellacious summer this year. And, I'll bet that for a change, a lot of people will be heading north to escape the heat…..”

And with a start, I realized that that thought just might become a reality. Think of it. Last year it hit 100 degrees every single day in Texas for a month! Now look at the graph above! Wouldn’t it make sense then, that anyone going on a summer vacation might want to head for, say the Wisconsin Dells to cool off? That thought got me to thinking about other locations further north; even say places across the border in Canada as new American destinations for summertime activities. This would be just the reverse of what usually happens in the wintertime when tens of thousands try to escape the cold by heading to places like Florida.It would also represent a major shift in where dollars are spent by families all across the continent!

Now, while this may become a new trend in America as the years progress, it was fun for me to experience a thought that probably happens to smart people all the time.
Posted by Dan Owen at 9:11 AM