Why our society is breaking down and who's doing it! 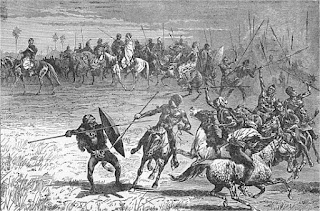 After reading an article about how two groups of golfers got into a fight when one group want to play ahead of the other, resulting in one person getting stabbed in the groin by a broken putter, I did a double take!

Is our society losing what little we had in the way of social graces? I seem to be seeing that more and more and not just in the media. I’m seeing it right here in small town America where a growing majority increasing display little if any couth. And, it’s not like their actions are intentional either. No, these individuals seem to be clueless in the extreme. It’s as though they were never trained to respect their fellow man, follow the rules or even know how to act with a sense of common decency. The result makes me feel like we’re already headed back to a Middle or Dark Age society where life was very brutal and extremely short. Seems the ‘me society’ is fast becoming the ‘me at any cost society’. But are they really to blame? Are the outside forces at work here?

Consider this. Some media pundits, most notably people like Glenn Beck, are stating that we can expect to see a huge upswing in violence in some of the larger cities as the jackals known as the Occupy Wall Street will be joining forces with financiers like George Soros and Union leadership with orders to cause as much terror and chaos as possible. Whether or not this is true, I don’t know. In point of fact, it’s major media outlets that are saying it! (SEIU became so infuriated by Glenn Beck’s comments that they even created a webpage  before Glenn left Fox with a message you can sign and send to his sponsors. Here it is:

I want to alert you to the fact that Glenn Beck - whose show you sponsor on FOX - is using his platform to make outlandish accusations about the President and Democrats and to advance baseless theories that prey on race-based fears.

His kind of rhetoric can instigate unbalanced individuals into committing rash and violent acts.

I presume your company does not want to enable such rhetoric, nor have your products or services associated with the kind of views and tactics espoused by Beck. I urge you to immediately cease all advertising on the Glenn Beck Program on the FOX News Channel.”

Uh, Really? – Well, now Glenn’s got his own program and it airs every workday on the web at GBTV! I kind of enjoy watching as he guts these people almost daily. (Gee, you’d think they would sue him if he was lying wouldn’t you. Well, no lawsuits as of yet)!

In point of fact, I agree with Glenn and other that our citizens are being intentionally and maliciously lied to by people and organizations with just one agenda – the take down and restructuring of America in a form that will benefit them. And, I think part of this has been actions designed to disassemble the core American family while also assaulting our religious base by now forcing birth control on our religious organizations. It's too bad for these bad folks that Americans are waking up to who may really be the true enemy of the state.
Posted by Dan Owen at 4:11 PM