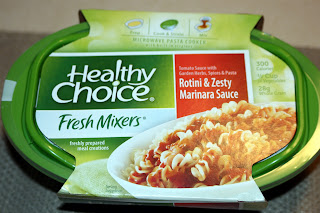 I’m not real sure what you’d call this dish exactly: is it an entrée or a side? OK, I’ll go with an entrée. It looked interesting when I happened across it at the grocery today. Close inspection revealed it to be a two part meal with the sauce separated from the dried Rotini by a plastic barrier inside a plastic tub. Real strange looking and therefore something I wanted to critique.

After getting home, I had more time to examine the packaging. One of the first things to catch my eye was the lack of any absurd little messages like some of the other package meals display. (My current favorite is Banquet’s dollar-a-throw TV dinners that advertize ‘A Good Source of Protein’! Really! Now who would have guessed anything might have protein in it)!

Another thing that caught my attention was the expiration date – in this case December 04 of 2011! Whoops. We’re a little bit beyond that date. Yet, what’s interesting is that there are no signs that this product has been sitting on the shelves at the local Country Mart for what is apparently quite some time! (I figure that most products like this are good to go for at least a year from the date of manufacture). Whatever the case, this package must have been sitting around somewhere for the better part of that time! Well, you know what they say, in for a penny and all that! Not only will I have a chance to critique a product made by ConAgra, but will also get to see how well this product has stood up to the test of time!

According to the directions for preparing this ‘oldie, but hopefully goodie’, fixing it is pretty straightforward with simple instructions for cooking the pasta and sauce. Total time to from microwave to table is about four minutes. Nutritionally, you’re getting about 300 calories, no cholesterol and only a little sodium, so not too bad in that department.

Now, as is my style, I’ve broken the meal down into six categories with a score of 1 to 10 and then some snide remarks made after each to help explain why I rated that aspect as I did. Here’s what I came up with:

I’m not sure if maybe the fact that the package was old or if the idea of making micro Rotini is a bad idea or what! Plan to steer clear of this one for the future. However, I will be doing a follow up post where I plan to take regular spaghetti, homemade sauce and see if I can’t use this cute container to make up something edible!

I contacted ConAgra with a complaint on this product and was told I should not eat something that far past its due date (duh). I agreed. And to be fair, the reviews it has received on their site were all positive. The gentleman I talked to (Matt I think it was) was helpful and informative. He was also kind enough to send me a coupon good for a replacement product which I intend to use on their Balsamic Vegetable Medley. A product that was highly rated by a couple of reviewers.

My coupon arrived on time, but surprisingly, I could not use it on another Fresh Mixer product as that was an item that was specifically excluded!
Posted by Dan Owen at 9:46 AM