Fast food, Sonic's Chicago Dog and all that extra trash! 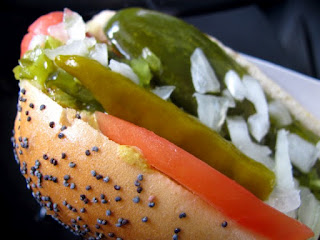 For under four bucks there's not much that beats eating a Chicago Dog and fries from Sonics in my little town of Forsyth, Missouri. Eating one of these takes me back many years to when I lived and worked in a suburb of Chicago. I can still remember having to wait in a line for my food at one of those roadside joints that used to spring up in and around the Industrial Park where I worked. You'd get this little tray that barely was big enough to hold the dog and fries at the same time. And those fries, they were always limp and sprinkled with some kind of red pepper that gave them a special taste all their own! Back then, I would scarf both down in just a minute or so during my lunch break and would get back to work. That little tray and a napkin would be unceremoniously dumped into a waste can and forgotten. 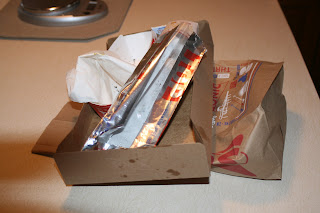 Back in those days nobody really ever talked about recycling. Trash was trash and that was that! We had landfill space a plenty and the throw away society was just getting cranked up. I do remember that about the only thing that was recycled was those coke bottles that you could redeem for a couple of cents each. But, even those quickly disappeared when aluminum cans were introduced. Then plastic came into vogue and the dumping party was in full swing! Now, as I stare at the remains of my meal. This pile of trash that weighs about 66 grams. I'm once again reminded of a growing problem.

It's trash! These days, many of us still toss out an awful lot of solid waste (about 73%) which ends up in landfills situated all across the country. But, most of us will readily admit that the writing is now on the wall. even though there is still plenty of space left, it's still just a matter of time before recycling will become the law of the land, and not just a good idea. Also, it's worth noting that nothing we use is infinite in supply. Aluminum, steel, tin, glass, plastics and even paper are now routinely used and then reused again and again. Did you know that aluminum can be recycled at just 5% the cost of making it from raw ore? That's also true, to some extent, for just about anything made of metal, glass or plastic. So, if you're all for saving energy, this is one way to help!