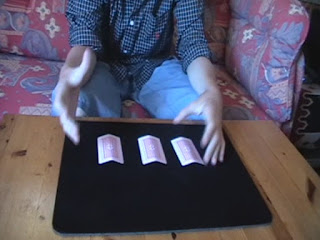 When thinking about Iran and her development of nuclear capability over the past decade, I'm reminded of a saying:

“If you can't awe them with the facts, baffle em with bullshit!”

Shuffling nukes around to hide them is a lot like the game of 'Three Card Monte'! Everything, and I mean everything that the West has learned covertly about the progress of Iran towards bomb making has pointed unerringly towards a 'furious and focused effort to develop weapons of mass destruction' and in such a manner that what should have taken decades to accomplish has been accomplished in less than one! Catching them in the act has been the problem!

But here's the facts. While the civilized nations have pussyfooted around with sanctions for much of this time, Iranian leadership has engaged in all manner of deceit, misdirection and even bald-faced lies in a concerted effort to elevate their extremist Islamic agenda.

The most recent visit by international nuclear inspectors to Tehran this last week was termed a failure as the following quote attests to...

“The agency expressed interest in all the areas of concern,” said a diplomat based in Vienna, who spoke on the condition of anonymity. “The team asked for access in the future to different types of sites and personnel, and that was denied."

One senior American official described the session between the agency and Iranian nuclear officials as “foot-dragging at best and a disaster at worst.” But a diplomat at the agency’s headquarters in Vienna said “disaster is too strong a word.” He added: “Iran has refused to address the issue for three years now. To be fair, you have to give them credit for at least discussing it. The dialogue is continuing, and that’s a good sign.”