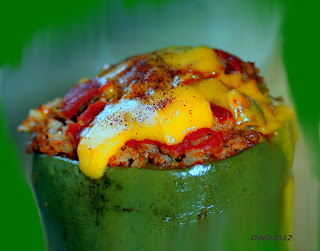 A semi-original effort on my part that produced a nice result! I was looking for a meaty entrée that was low in calories, relatively low in cholesterol and sodium when I stumbled across this winning combination!

Make up the rice (about 1 cup) according to package directions. Set aside. Blanch peppers in hot boiling water for about 3-5 minutes. Combine the hamburger (about half a pound) and onion, brown in a pan over medium heat and drain off any excess fat. Add the rice, basil and garlic. Mix a little then add about half the can of tomato sauce and mix well. Add this mixture to the bell peppers. Overfill the cavity slightly. Place these in a crock pot that has been set to low. Drizzle the rest of the tomato sauce over the top of each tomato.

Place the peppers into the crock-pot, stuffed side up. Cover and cook on low for about 3 to 4 hours. Just before the end of this time, cut the cheese into four narrow strips and make X’s over each bell pepper. Re-cover and cook for another 15 minutes (or nuke briefly in the microwave to melt the cheese). Remove and sprinkle with some paprika! Note: I did not use and slat in this dish. If I feel the need to do so, I use the so-called fake salt or potassium chloride for that purpose). Serves 2.

Here’s the nutritional panel I came up with for this recipe. It represents two large stuffed bell peppers with lots of ground beef and rice. This is a meal you have to be careful with if you're on a diet like me. In my case, I only eat half of a pepper (see line of figures in blue) that’s been cut lengthwise. To this, I like to add one of more vegetable sides like streamed green beans, corn or whatever you might have in the pantry. In most cases, you should be able to stay under 400 calories for a filling and great tasting repast!You'll also stretch the budget a bit as I paid a dollar apiece for the peppers on this date! 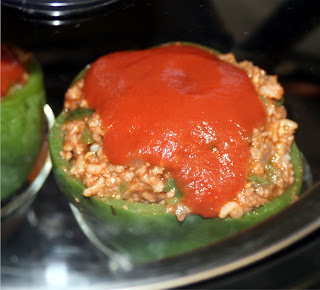 The peppers turned out pretty good with the exception of the way the filling had a tendency to fall apart. Next time, I may elect to add one or two egg whites to the mix to see if that helps. I also plan to add about two to three tablespoons of ketchup to the tomato sauce to kick it up a bit.

This recipe was redone slightly the next day using grated cheddar cheese (about 20 grams) that was mixed in with the meat and rice just prior to cooking.  The peppers were also placed in small Pyrex glass container to allow them to stand up better in the slow cooker. I also added about two tablespoons of plain ketchup to the mix which helped the over all flavor a lot!

If you prefer, place your peppers into a small baking dish and cook them in a pre-heated oven at 350F for about 20-30 minutes!
Posted by Dan Owen at 12:09 PM