I figured it was high time for a change in the manner in which I score and rate frozen TV dinners! It suddenly came to me that the way I was going about things before were ambiguous in terms of sidestepping the truly important issues; that being the taste, smell, texture and overall appearance of the meal in question. So, from now on, I’ll drop the cost and package art scores from the scoring panel (which no one gave a rat’s ass about anyway)!

Today, I will be savoring, devouring and otherwise rending apart, the hoped for goodness of a creation from the folks at Healthy Choice! This time the lucky winner (and focus of my culinary lust) is an entrée by the name of Lemon Herb Chicken! According to the HC site, this meal consists of ‘tasty chicken tenderloins are prepared in a savory herb lemon-Chardonnay sauce and are mixed with firm whole-grain pasta, juicy cherry tomatoes, and succulent green beans!’ Wow! Now, who could resist that? They then go on to tell me that I will be ingesting only 210 calories. (Hold up a minute! The box plainly states 200 calories. Well, perhaps it’s just a misprint…) 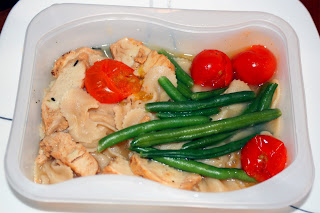 Upon opening the package I had a strange discovery – whole frozen cherry tomatoes. Why golly gee, how Californ-i-a is that? Upon reflection, this whole meal deal does reek of all things San Francisco! (For some reason the tune, ‘Do you know the way to San Jose? I’ve been away so long…’ popped in my head) Well, it was a great song, so maybe this entree will be too! (Feel free and play the song by Diane Warwick on another tab while reading the rest of this mess)!

Nutritionally, I’ll score one for the owner of the company as he has lead the charge to keep the sodium levels down in this line of products! This one comes in at only 480 mg. Awesome! As I mentioned earlier, the calories are good to go at just 200 and both the cholesterol and carbohydrates are very low! From this standpoint, what we have here is a ‘diet quality meal’! See that my jelly belly – I’m looking out for ya! (My belly promptly rumbled in what I will assume was an affirmative response). Now, on to the scoring:

Seeing as how you can prepare this meal (and others like it in the line) in just about four minutes in a microwave, justifies it as a good bet for a low calorie lunch candidate at work! I plan on keeping a few in my fridge at home also.


Disclaimer: All content in this post is the sole opinion of the author and may not reflect that of other readers.
Posted by Dan Owen at 10:26 AM