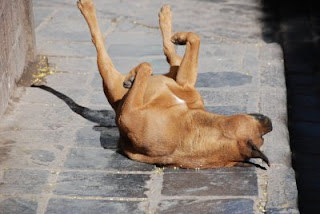 [this dog is not dead, he's just resting]

I love listening to dyed-in-the-wool hyper left-wing Democrats who look with hungry eyes to the corporate owners who seem to be so damn rich! Their universal complaint is, “how cum they make so much money? Why, that’s downright greedy. They should be spreading that wealth around!”  This, by the way, is the mantra of the WSO movement (Wall Street Occupiers) and I can see their point. I could use a handout (or two) myself!
----------------
But let us not be so...so anally focused here folks! What about the rest of the world? You know, it’s a fact that an American citizen making just $20K per year looks awful darn rich to someone living in Africa who makes maybe thirty cents a week!  If we’re going to take from the wealthy here (to give to those who’ve never worked a day in their life), I say we need to look long and hard at all those fat pocketbooks of the Middle Class working stiffs. I mean surely, someone living on 20K could do just as well on say 13K?? Well, couldn't they?

Hey! Maybe we could even figure out some way to ‘redistribute’ that wealth in a fair manner also! Maybe Obama’s ideas on ‘Cap and Trade’ will work after all. (It too is designed to move all that greedy Middle Class wealth to poor folks around the globe). What a grand idea by a President who puts his country first! (Say what)?

So, here’s the plan, Jan – first we take anyone who makes more than $250,000 and tax them at a new rate of 80% to 90%! That will leave them on about the same level as the rest of us Middle Class jerks. (Never mind that most companies would be in danger of folding – Obama can easily bail them out with money from his stash)!

Next, we implement a Super Duper Cap & Trade (with malice aforethought) and milk those Middle Class cows until they turn pale. Why, it’d be just like those doctor’s worked in the Middle Ages – you remember – when a patient got sick, they’d attach leaches to help drain out all that nasty old blood. Patients who did survive the procedure were announced ‘cured’ and allowed to stagger home. (This worked out great until some busybody went and found the cure was actually killing all the patients).
---------------
Now, I know I can hear many of you out there complaining that perhaps some of the money (a teensy bit) will go to fill the pockets of special interests or union bosses. I’m aware of your fear and concern. That is why I plan to set up a National American STW (spread the wealth) drop site at a mailing address I will soon put out on the net. Yes, I know it will be a lot of work managing billions of dollars in contributions a week, but I promise to soldier on until the very last penny that is squeezed donated from ‘You the Peeps’ is resting safely in a Swiss account somewhere far from these shores. From that account, I will then disseminate the funds as I (DanoManno Dingo) see fit. Thank you all in advance for your generosity.
Posted by Dan Owen at 10:24 AM

Email ThisBlogThis!Share to TwitterShare to FacebookShare to Pinterest
Labels: Danomanno, Forsythkid, My plan to redistribute the wealth, Ninety niners, WSO