Missouri could experience a bumper crop of mosquitoes this year! 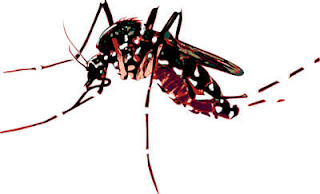 If 2012 is anything like last year was, be prepared for an invasion of hordes of real life blood suckers. Yes, in a state that supports over fifty species of mosquito, you can rest assured they will be around in huge numbers. And, global warming could help create an even larger crop just in time for those cookout you've been planning for all winter long.

Factoid: What’s the most dangerous creature on earth? Without question the answer is: the mosquito. Mosquitoes and the diseases they spread have been responsible for killing more people than all the wars in history. Even today, mosquitoes transmitting malaria kill 2 million to 3 million people and infect another 200 million or more every year. Tens of millions more are killed and debilitated by a host of other mosquito-borne diseases, including filariasis, yellow fever, dengue and encephalitis.

Now, add to this mix of dangerous bugs, a new species, the Asian Tiger mosquito! An aggressive and mean-spirited insect that feeds during both the day as well as the night. Also, being as it is a 'container breeder' it doesn't need large bodies of water to raise up young, preferring anything that can hold small amounts of water like bird feeders and even discarded potato chip bags!

Tiger mosquitoes were introduced by accident to America sometime in the mid eighties. But, since that accident, they have proven to be extremely prolific and have spread throughout the southern states and as far north as Pennsylvania.

So, this spring and summer, it may pay to stock up on repellants or even just plan to stay inside!
Posted by Dan Owen at 5:49 AM