While watching an episode of Glenn Beck on GBTV one afternoon, he made the remark that ‘everyone should stock up on Mac n Cheese’ or something to that effect. He was talking about the need for his viewers to ‘hoard food’ as a hedge against when the United States crumbles into pieces. Everyone, he maintains, needs to have at least a year’s worth of food on hand for the ‘hard times’ that are coming. 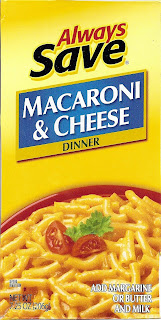 Is he right? I dunno. Perhaps. But, it got me to wondering why he mentioned this very common boxed meal by name? Personally, it’s be a long time since I enjoyed a dish that used to be a staple around my house. At half a buck a box, it’s relatively cheap and packs a wallop in the calorie department. (Something that would serve you well in a disaster, I guess).

So, for this critique, I decided to stay on the cheap side of things and go for a generic ‘Cheese and Mac’ boxed item I found on the shelves of my store. It’s branded ‘Always Save’ and is made by a company called Associated Wholesale Grocers (leastwise it’s distributed by them).

After getting home, I got a pot and filled it with 6 cups of water as per the directions. This was brought to a boil and then I added the pasta and let it cook for about 8 minutes. (Important: Whenever I do pasta, I begin testing it a few minutes before the recommended time for proper doneness). I found 7 minutes on light boil to be about right! After draining off the water, I then added the packet of cheese mix along with ¼ cup of butter (half a stick) and ¼ cup of 2% milk. This was stirred with a fork and before my eyes, I had made a meal! Man, just feast your eyeballs on all that cheesy goodness!

Now before you dig in, understand that a serving is considered to be about 2.5 ounces of product. There are about three of these per box, so to make things simple just divide it into thirds. Note that this will work out well if you are feeding yourself and two kids. (Not so well if you have two kids and a significant other)!

In the top picture, I have about half a serving or 200 calories! Use the fork for comparison. Hmm, doesn’t look like much does it. And yet, a full serving is almost 400 calories! That’s the equivalent of eating a McDonald’s Double Cheeseburger! (Personally, I’d take the cheeseburger)! Anyway, let’s get the scoring done:

Now for some bad news! My box informed me that this product is best consumed by Dec 15, 2012! Hey! That’s not very long. Also, if you ‘hoard’ this product; you better make sure to place it in an 'insect proof' container. Bugs can drill right throw paper in no time at all! Now, with that in mind, I plan to pick up a few boxes next time I go shopping. While Mac n Cheese will never make it to the culinary Hall of Fame – it is a pretty tasty addition to a regular meal, and no matter what, kids love it!

Author's note: The only issue I would have, for hording this product in times of trouble, is the need to have butter and milk on hand as necessary ingredients. Tough to do in a collapsed world!
Posted by Dan Owen at 11:12 AM